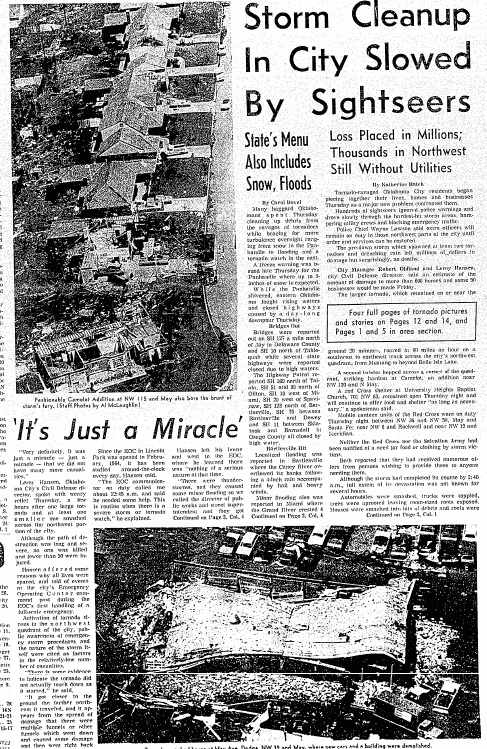 This is the second in a series on the history of storms in Oklahoma.

Any time a tornado touches ground, it’s scary. One tornado can cause devastation.

On April 30, 1949, not one but four tornadoes touched down in the Oklahoma City area on a day that kept residents scrambling. But that was only the first time more than one tornado hit OKC on April 30th. The same thing happened two years later, as well as in 1970 and 1978.

For whatever reason, April 30th is a popular date for storms in Oklahoma. On no fewer than seven occasions, tornadoes have hit the Oklahoma City area on that date. But why?

It’s probably just coincidence. The prime tornado season runs from April to June, and April 30th lies in the middle of that range. For some reason, April 30th has provided some dark clouds and weather over OKC.

In 1949, four major tornadoes struck Oklahoma City. The first was an F4 that touched ground near Blanchard at about 2:30 PM destroying and damaging several homes before easing its way into Norman. It stayed on the ground on the North Campus of Oklahoma University where it damaged buildings and tore off parts of a roof. It then whisked off toward Stella where it grew weak and dissipated. In all, 48 people were injured, with three people losing their lives. A few hours later a tornado hot Tinker Air Force Base where four barracks, a laboratory, several warehouses, and multiple airplanes and vehicles were damaged. The Oklahoman reported that “heavily hit by the blow were two buildings housing the 185th fighter squadron of the air national guard.” Thankfully the members of the guard were training outside at the time and were not in the building. Two more tornadoes were reported west and south of Oklahoma City. Power and telephone service was completely cut to Oklahoma City and several surrounding areas. In all, more than $1 million in damages was done during the ’49 storms on April 30th.

Two years later on April 30th in 1951 a tornado with high winds bounced its way through Oklahoma City in a hurry, leaving a path of destruction. This twister followed a path southwest to northeast “on a line as true as if drawn with a ruler” reported The Oklahoman. That tornado was gone quickly and it didn’t claim any lives, though it ripped the roofs off several businesses, including the largest carwash in the city. Shortly after, another tornado hit the northwest part of OKC, affecting a 15-block area. Both tornadoes were classified as F2’s.

A span of 19 years passed before another tornado struck the area on April 30th. Then in 1970 in the very early morning hours, a trio of tornadoes struck in Mustang, OKC, and north of Yukon near Lake Hefner. The first two were reported around 1 AM and only a few people actually saw them. One resident of Mustang said of that tornado “It sounded like a jet engine.” The first tornado followed a ½ mile wide swath from the southwest to the northeast, tearing the roof off of 50 homes and damaging 1,473 homes in all. Approximately 300 businesses, eight schools, and 300 street signs were damaged. Almost every phone in the city was inoperable and 215 power lines were reported down. At the same time, a F1 tornado moved from Yukon to north of Lake Hefner, it was fairly mild and little damaged was reported. Thirty minutes later the third tornado formed and touched down on the north edge of Lake Hefner, moving northeast, damaging ten homes. According to the National Severe Storms Laboratory, these tornadoes were part of a much larger family of storms that began southwest of Altus, Oklahoma and traveled all the way to Stillwater.

In 1978 an April 30th tornado barrage descended upon Oklahoma City again, this time in the late afternoon. The first hit the small town of Richland at 5:55 PM and was rather mild, no one was injured. A few minutes later another touched down two miles west of Richland and moved on before dissipating south of Piedmont. There was only minor damage reported. About a half-hour later a much more intense twister (rated as an F4 storm) moved east/northeast from Piedmont through Edmond. Amazingly, several large objects, including oil storage tanks, automobiles, and a stock feeder, were lifted by this tornado and carried up to a half mile away.

The storms of 4/30 have not returned since 1978, a year when vicious weather struck across the United States in all seasons. But the legacy of those storms on 4/30 are the reminder that bad weather can do incredible damage during tornado season.

GET IN TOUCH
Copyright Coryell Roofing and Construction, Inc. 2022 - All Rights Reserved
Search